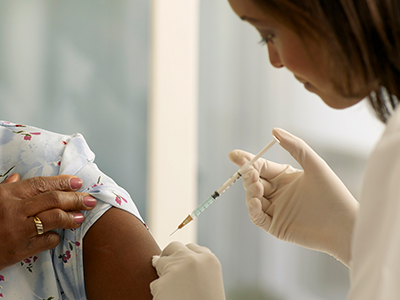 Q: Why should one have the flu vaccine every year?

Annual vaccination against influenza is recommended for two reasons:

Q: Why do the strains in the flu vaccine change every year and how do they choose which strains to put in the vaccine?

The influenza virus is very intelligent and is able to change its genetic make-up in order to evade the human’s immune system. Almost every year there are slight changes in two of the proteins on the surface of the virus, known as haemagglutinin (HA) and neuraminidase (NA). A surveillance system throughout the world monitors for these changes and identifies which strains are circulating. The strain composition of the vaccine is discussed at WHO headquarters twice a year, in February for the Northern hemisphere and September for the Southern hemisphere. The strains are selected to match as closely as possible those circulating in the population or what is predicted to circulate in the forthcoming winter, to ensure that the vaccine will have an optimal efficacy. The strains chosen for the Northern hemisphere vaccines and the Southern hemisphere vaccines often differ.

Q: When should the vaccine be given?

Everyone should be vaccinated as soon as the vaccine becomes available, but it is never too late in the season to administer the vaccine. Immunity renders protection around two weeks after vaccination and although the level and duration of protection may vary, it usually lasts for the duration of the influenza season.

Q: If someone gets respiratory symptoms during winter, does it mean that the flu vaccine that they had, failed?

Not necessarily. The flu vaccine will only protect against the strains of flu that are in the vaccine. A different strain might have been circulating, for which the vaccine has no protection. Another cause may be that the patient was already incubating the flu when he had the vaccine. The vaccine takes about two weeks to be effective and the incubation of flu is only about 1-4 days (with an average of two days). Respiratory symptoms are not only caused by influenza, but may be due to other viral infections or bacterial infections. The flu vaccine has no efficacy against these infections.

Q: Is the ’flu vaccine a live vaccine and can it cause flu?

No, it doesn’t. Having the flu vaccine gives you flu is one of many myths about the flu and its vaccine.

The flu vaccines that are available in South Africa are made from killed viruses. They therefore cannot cause flu. The inactivated viruses simply enable your body to develop the antibodies needed to ward off influenza

It’s possible, though, that you catch the flu – or appear to – even if you get a flu shot.

Q: Is it safe and advisable for a pregnant woman to have a flu vaccine?

Yes. The Strategic Advisory Group of Experts (SAGE) of the World Health Organization (WHO) has identified pregnant women, irrespective of the stage of pregnancy as the highest priority group to receive the flu vaccine.

The 2018 South African influenza guidelines also reflect this. Influenza has a significantly higher rate of hospitalisation as well as death in pregnant women, including otherwise healthy pregnant women. In addition, there is a very valuable advantage in offering protection via passive transfer of immunity to the infant before it is eligible to receive the first dose of influenza vaccine at six months.

Q: Can children have the flu vaccine and from what age?

Yes, children from six months of age should get the flu vaccine. However, some products are only indicated for older age groups. From six to 36 months, the dose is half that of an adult. From six months to nine years, the child will need two doses four weeks apart, if it is the first year that they are receiving the flu vaccine.

Yes, the vaccine is available for the 2019 flu season.

Q: Will I be able to claim Vitality points for having the vaccine?

You have until September to earn points for getting a flu shot.

To help encourage this behaviour and promote a healthier society, Vitality members will earn 1 000 Vitality points for completing a flu vaccination anytime between March and September each year, the vulnerable colder months of the year, while the vaccine is still relevant enough to be effective.

This means that flu vaccines administered outside these most vulnerable months will not earn you Vitality points.

The Discovery Health Medical Scheme (DHMS) provides cover for flu injections from the available funds allocated to members’ Medical Savings Accounts (MSA), depending on their plan.

In cases where members are registered for cover for a chronic condition, the Scheme may also pay it from their Screening and Prevention benefit because they are taking steps to prevent complications.

Sr. Christine in Manor Medical Vitality Centre, West Wing, will be able to advise if your flu shot will be covered. There may also be a portion payable by you. Book your appointment now.